You want to make the right impression when you pursue your secondary education, especially when it comes to your instructors. Formalities and titles are culturally unique, and committing the errors of calling an instructor by the wrong title might be a blunder you want to avoid. So what are community college instructors called?

Community college instructors are called professors just like instructors at universities and other colleges. “Professor” is an umbrella term for facilitators working in post-secondary academic institutions.

In this article, we’ll discuss the difference between teachers and professors. We’ll also talk about the similarities between community college professors and other university professionals and why they’re worthy of the same title (source).

Why Instructors Are Called Professors at Community Colleges

The word teacher takes on many meanings, and some are interchangeable for coaches, instructors, and other educational roles. If you’re concerned about calling your instructor by the wrong title, you might be wondering whether or not your community college teacher is technically a professor.

In the US, instructors at community colleges are called professors.

“Professor” is an overarching term meaning postsecondary educators and has little to do with the type of college or university they’re teaching at.

As we mentioned above, titles can be pretty cultural and language-specific. In Spanish, the term “teacher” is translated to “profesoro/a,” just the same as the term “professor.” In the US, though, teachers and professors are defined differently.

However, the type of school they’re teaching at is not a factor that plays into the title.

The Difference Between a Teacher, Instructor, and a Professor

In the US, there’s an easy distinction between teachers and professors. The main difference is the grade or level of education that your facilitator is instructing. College instructors have typically been deemed professors, while primary and secondary instructors are called teachers.

In US schools, there are also a few distinctions between professors.

You may have heard of an adjunct, associate, or assistant professor. These are all still post-secondary instructors, which is why “professor” is tagged on the end of each of them.

But what difference does the prefix make?

The difference is usually the length of the college teaching career and whether or not the university has tenured the professor. The distinctions are as follows (source):

The terms can still have different meanings from school to school, though.

Boston University has even stricter requirements, for example. Their assistant professors are recognized on a state level, associate on a national level, and professors internationally. They also qualify their “instructors” and “professors” differently, clarifying that instructors have master’s degrees while their professors have their doctorates at their university (source).

The Definition Of Being Tenured

A tenured status means a professor has been hired on for life by a university and can’t be fired or let go without cause. The degree and work experience requirements differ by university, but tenured professors have usually worked at the university doing research and facilitating longer than non-tenured colleagues.

Tenured professors are, of course, allowed to leave their position if they do, but it’s much harder for universities to fire them if they’d like to end their professional relationships (source).

A common misconception is that professors have master’s degrees while teachers have bachelor’s degrees.

This is false, as even your high school teachers who had master’s degrees or even doctoral degrees were technically teachers. Another common misconception is that community college teachers are less qualified than teachers who facilitate college-level courses at universities or state colleges.

This is also untrue.

Just like you have personal preferences and requirements for your job, professors can decide based on the career they’d like to pursue. The main takeaway is that college-level instructors are qualified by the same characteristics, which is a minimum of a master’s degree regardless of school status.

Different universities may have different requirements for their instructors, but all post-secondary instructors are still filed under “professor.”

What To Call Your Community College Instructor

So, after all that information, you may still be wondering what to call your instructor. Do you call them instructors? Teacher? Professor? Doctor? Teach’?

The straightforward answer is that you can expect to call your instructors in college “professor.”

Most professors with doctorate degrees will request you call them Doctor, and rightfully so after earning their degrees. Others might want you to call them Professor or would prefer just their first name.

But they may be preferred to be called something else, and it’s okay to ask.

When referring to your college instructor, it’s a good rule of thumb to ask what they’d prefer to be referred to as on the first day. Some professors hold doctorate degrees, so they might want to be called doctors, while others would just prefer you call them by their first name. Schools typically provide their freshman students with new emails with the school’s domain. You use this email to communicate with your professors, but there’s a chance you may have sent an inappropriate email from the wrong address. You quickly deleted it, but the question if your school can see it lingers – can your school… For some, prom is one of the highlights of high school. So if you enjoyed picking out your clothes and choosing who to invite, you want to do it again, right? But if colleges don’t have proms, how will you be able to do this? Colleges don’t have school-wide proms, but organizations—especially fraternities and sororities—organize… 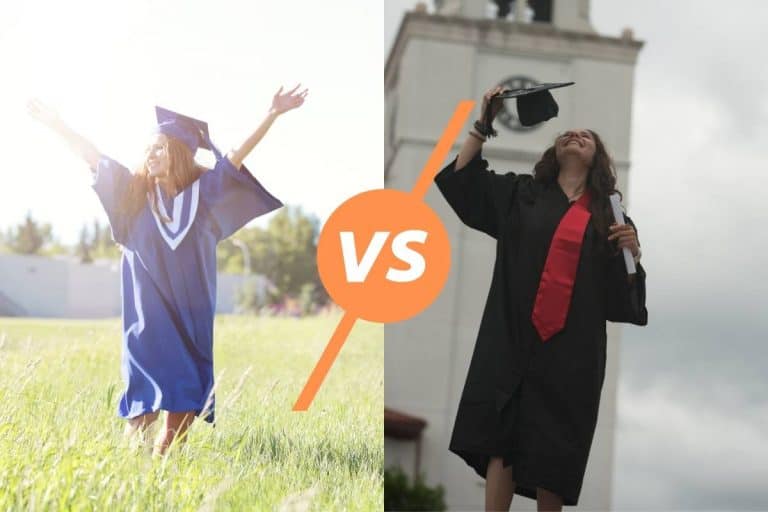 Graduating high school and graduating from college are both major accomplishments that should be enjoyed and celebrated. They are very similar in many ways, but they are also different. College graduation is like high school in that it involves a celebration of accomplishments after completing a degree. The ceremony is similar, involving speeches from high-performing…

Community college is an excellent option for those looking to pursue an education on a budget. Compared to four-year universities, they’re a lot more affordable. You might be wondering what makes them so cheap. Community colleges are so cheap because they don’t put as much money toward faculty salaries, infrastructure, room and board, meal plans,… The college experience is rapidly changing, especially in the wake of the COVID-19 global pandemic. College students are demanding more flexibility, and demographics are changing as well. However, with that flexibility, does that mean that you’ll soon have college classes on the weekends? While some college students have weekend classes, not every college allows weekend…

Getting into college is more or less the perfect dream for many high school students. But there’s one thing that seems to skip over our heads where college is concerned, and that is that it’s not a bed of roses. Even if you happened to get into your dream college, don’t be surprised to find…